There's a reason why that over-used term "people are your biggest asset" is...overused!

What is a Post-Merger Integration?

Mergers and acquisitions, or "M&A," are well-known to many, as they are often reported on in national and international press.

Usually, the headlines are regarding a major deal involving at least one well-known brand, such as when Softbank acquired ARM for £24.3bn, or a more consumer-friendly report informing us that George Clooney sold his tequila firm. Once the deal has been agreed, that’s when the Post-Merger Integration occurs. But what is that, exactly?

To help define this term I have turned to Wikipedia, as it has no commercial bias:

“Post-merger integration, or PMI, is a complex process of combining and rearranging businesses to materialise potential efficiencies and synergies that usually motivate mergers and acquisitions. The PMI is a critical aspect of mergers; it involves combining the original socio-technical systems of the merging organisations into one newly combined system.”

And here is a definition from the Institute for Mergers, Acquisitions and Alliances:

“To capitalise on the latent synergies of the newly merged or ‘transition’ organisation, the transition process itself must reflect the principles of – and provide the conditions for – synergy throughout its design and execution. This means promptly involving people from both organisations in core business tasks (selling, planning, decision-making), as well as on merger project teams. It also means visibly demonstrating a commitment to learning and to creating together something greater than either party could create on its own.”

However, the phrase “combining the original socio-technical systems” (of two or more companies) for me nicely summarises PMI. From a technology integration standpoint, due to the relationship between the technical and the social systems, both need to be addressed in order to deliver the integration well. You can have a great tech delivery and systems, but without the staff fully on-board there will be issues and vice-versa.

Note that ‘post-merger integration’ will mean something specific to the M&A deal-makers, but to the technology staff on the ground, it may represent many things:

Which leads me to the most significant risk of PMI: people.

It is a commonly overused phrase that "people are your best asset" when it comes to projects, companies and new endeavours. Indeed, for M&A post-merger integration programmes, they are your ONLY asset.

Engaging staff is the most critical requirement of a post-merger integration project, and one that is often mishandled, where the impact is not seen until people either leave the company or, worse, become very unwell during the process. This is because it is often assumed that it is a Human Resources function to help deal with career issues – which indeed it is, for the general “what will happen to me?” type questions, but not for detailed discussion on IT matters and technology.

According to Gallop, worldwide, 13% of employees are engaged at work. Introduce a major event such as an M&A deal, and the risk of impacting engagement further increases significantly.

Depending on which side of the fence you sit on as part of this merger, work might have just become a major personal concern.

When it comes to the people impacted by an M&A IT transformation, prevention is certainly better than cure.

But what’s in it for tech employees?

The main tension and challenge during the initial project inception is being able to motivate staff who have been hit by sudden uncertainty. A good relationship between staff and the IT team is a long-term requirement, therefore openness is essential. You need the team on-board in the early stages to ensure that the due diligence information is of sufficient quality, and in planning and implementation stages to get the systems 'over-the-line’. The team will be happier and operate more effectively if they are respected, and if the project is operated with their needs in mind rather than a focus on ‘quick fixes’.

During the due diligence phase, it is worth the investment to spend some time one-to-one with some of the team in order to determine what projects were successful, why they succeeded, and what projects they particularly enjoyed delivering.

A common mistake is to approach a PMI project as a ‘normal’ technology project. Following briefings about the deal that has been agreed, bring teams together to analyse and transform systems. Human Resources will undertake the employee staffing and HR transformations, but from a technology perspective, they will not know how the deal benefits staff personally. People will have questions like, “Will my skills still be required, and will I be secure? What’s the new technology environment likely to be like? What can I do to secure myself, and what can I learn?”.

A good approach is to look at the project from their perspective, and identify how the post-merger integration project could be an opportunity for them to up their game and shine. For example, an engineer could potentially step up to assist in a team lead position, or they could learn and master a new technology.

If they can see the project as an opportunity to grow, it is likely that the team will naturally present aspirational needs, for example:

By understanding their needs, it is possible to create a better performing team.

Clichés are clichés for a reason, and this is certainly the case with regard to the idea that perceived issues are actually good opportunities. This is true in the case of PMIs, because the staff have an opportunity to learn more, and be more confident of their value as they transition to the new organisation.

It is important to understand the skill set of the staff, and how much of an impact they have on the IT environment, as there is always the risk that the more ‘capable’ staff will leave the project early, as they will be keen to find a new position before their colleagues start to look at the market.

If the PMI team focuses on the development of the technology staff at the core of their delivery it will help address this primary challenge and help deliver a smooth(er) integration.

This is one part of a series of five blogs on how to deliver a successful post-merger integration, the other sections can be found here: 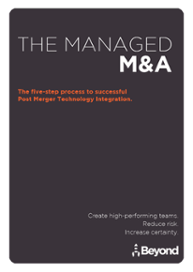